The new Shake the Baron music video for Ghost Hits title track premiers today on Baeble Music. It stars yours truly getting beaten to a bloody pulp in a boxing ring … enjoy. Baeble writes, “The song is the title track off the bands’ sophomore studio album, released last year (get it here), and it combines a frenzied guitar jangle with the cooling, tidal flow of Andrew Oedel’s voice. The video, directed by Alex Amoling, brilliantly juxtaposes the song’s tone with a bloody barrage between the sexes. The ending is surprising and refreshing, and we’re certain that it’s totally different from any boxing flick you’ve ever seen – although it would be pretty awesome to see Rocky III end in such a manner.” 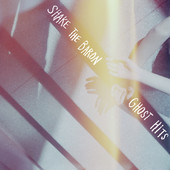 Ghost Hits is my band’s second full-length release. The title track is the most collaborative song we’ve ever made– it came entirely out of an impromptu ten-minute jam. Guitarist Jon Markson and I recorded the album ourselves in the band’s basement practice space and at The Gallery Recording Studio in Brooklyn. The album was mixed by Justin Gerrish (Vampire Weekend, Weezer) at DNA Downtown in Manhattan. Dig on iTunes.